Owning a business is relatively easy. Operating a successful, profitable enterprise is an entirely different and more complicated matter.

The easy version is to figure out if you want a sole proprietorship, LLC, S, C, or other corporate designation and get a EIN, then open a bank account. You are now a business owner! 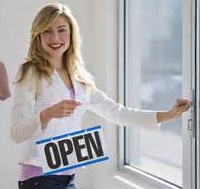 Hanging a shingle does not mean customers can find you.

That may be what you think, but let’s look at what you don’t know. Most business owners don’t know what they don’t know about owning a business, so let’s scratch the surface with these few things from a long laundry list, in no specific order. Come back for more in part 2.

We haven’t even scratched the surface or discussed branding and marketing and customer relations and location and many other aspects of operating a business, so check back for part two next week.

Developing your corporate brand begins with your business plan.

A business owner knows what they want to do but may need the skills of a more experienced planner to compile the plan more effectively and obtain financing.  Many people in business also don’t know what they don’t know, which means having someone with the expertise in many different areas to assist can save time and money.  Expertise in leading a sales team may not translate well to budgeting and financial projections.  Being proficient in production techniques may leave something to be desired when it comes to choosing advertising channels or defining consumer markets.  Professional consultants earn their fees by having the knowledge that proves beneficial in a variety of areas.

The first step in starting a business involves some soul searching and market research.  When Brand Irons meets with a prospective client, it is essential to be open and honest in the discussion.  We look for commitment to the process of planning as well as to the long-term success of the business concept.  We also recommend a feasibility study to assess the economic and market conditions, potential profitability, and other financial considerations before deciding to proceed.

Spending a little money up front to know the idea has merit is a wise investment.

While the cost of a feasibility study may be daunting, if the results indicate a better-than-average potential for return on investment (ROI) and the owner decides to go forward, the foundation of the business plan has been put in place.  Assembling the rest of the plan and crafting a strategic model to implement is relatively simple once the decision is made to proceed.

What few people who want to start a business realize is that only one out of every 50 business ideas is commercially viable.  That’s a 2% success ratio!

With the proper guidance from business and marketing consultants such as Brand Irons, you can craft a brand identity for your business based on the foundation provided by your business plan and strategic model.  Your business is unique, which is one of the reasons you need professional assistance in compiling a brand strategy that is consistent with the unique nature of your business and capitalizes on your assets.  The result is a more focused approach to marketing your business and reaching your desired audience.

Have you ever asked for acetaminophen?

More than likely, you’ve asked if anyone has some Tylenol.  That’s a classic example of brand success.  If you visit the Tylenol website, you’ll find 20 different varieties of the product, and learn that the parent company is the McNeil Laboratories subsidiary of Johnson & Johnson.

In the mid ’70s, Tylenol moved from the 5th most popular analgesic to become the number one branded over the counter (OTC) analgesic product on the market.  It had become a more familiar pain relieving product than aspirin.  As often happens when a product is the top-selling or more recognized brand, someone or something tries to take it down.

In 1982, someone tampered with bottles of Tylenol Extra Strength by adding cyanide which killed several people in the Chicago area.  No one was ever caught, but Johnson & Johnson made a smart move.  The company distributed warnings to hospitals and distributors and halted Tylenol production and advertising. On October 5, 1982, it issued a nationwide recall of an estimated 31 million bottles of Tylenol products with a retail value of more than $100 million.

Some considered the move a death knell for the product, while the consuming public praised it for the emphasis placed on the greater well-being of the general public.

The company advertised in the national media for individuals not to consume any products that contained acetaminophen.  When it was discovered that only capsules were tampered with, Johnson & Johnson offered to exchange all Tylenol capsules already purchased by the public with solid tablets.  The company also took the innovative step of creating tamper proof seals for bottles, creating a renewed sense of security with the consuming public when Tylenol was re-released.

Now, more than 30 years later, the tampering incident is little more than a footnote in the product’s history.  The Tylenol brand owns the market for acetaminophen pain relieving products.  Bayer still owns the brand recognition for aspirin, while one of the other pain relieving medications, Ibuprofen, has become recognized for the product rather than the manufacturer.  In essence, it is it’s own brand.

The lesson in this case study of a successful brand is that Tylenol has dominated when it comes to the 1st Law of Marketing:  The Law of Leadership.

It is the leading brand because it is the first brand in the prospective customer’s mind.  People don’t ask for acetaminophen, they ask for Tylenol.  Once you have a customer, they are likely to stick with your brand – as evidenced by Johnson & Johnson’s success with recalling Tylenol products because of the tampering incident.  Tylenol has become the generic term for acetaminophen, another example of that 1st Law of Marketing.

Remember that marketing is perception, not the product, so people perceive the first product in their mind to be the superior product.  The first brand tends to maintain its leadership because the name often becomes generic, as is the case with Tylenol.

Professional consultants are available to help your product become the #1 brand at whatever scale is possible.

The 3rd Immutable Law of Marketing is the Law of the Mind, as defined in Al Ries and Jack Trout’s 1994 book, The 22 Immutable Laws of Marketing.  Briefly stated, it means that being first in the mind of the consumer is more important than being the first to the market with a product or service.  The success of Johnson & Johnson’s Band-Aid brand adhesive bandages is a perfect example of a company owning the consumer’s mind.  The Band-Aid brand name today is synonymous with a first aid product, but it is also identified with a method of providing solutions to problems.  It has become a common term in everyday language, which solidifies that place of ownership in people’s minds.

How many times have you heard someone identify a temporary solution as needing a “Band-Aid” for fixing the problem?  The benefit to Johnson & Johnson is that every time the name is mentioned, in whatever context, it reinforces the brand’s identity in the minds of consumers.  The consumer may not know that Band-Aid is a Johnson & Johnson product, but they do know what a Band-Aid can do for a cut, scrape, or other minor injury.  The consumer doesn’t ask for a Curad bandage, even though that might be what they wind up using to patch up a small injury.  They ask for a Band-Aid.

The success of the adhesive bandage for Johnson & Johnson has enabled the company to diversify and offer other medical-related products to that consumer market.  Gauze bandages and a host of other products have found a place because the Band-Aid brand is so strong.

While this may be a great success story, you’re probably wondering what this has to do with your business.  Good question.

Your brand may never achieve the level of ownership Band-Aid has in the mind of the consumer, but it could.  You may need professional advice, but if you can become the leader in your industry and own a specific category or niche, there is an excellent chance your product or service can become the preference of your customers and others.  It takes market research, graphic development, and a number of other pieces to put it all together.

To establish your brand, start with the reason your business exists.  Think about your mission and why you do what you do.  The #1 immutable law of marketing is the law of leadership.  That means being the leader in your industry or community or wherever you can exert influence as a leader, and thus own the brand.

If, for example, your business is a funeral home and there are two other funeral parlors in your community, how can you be the leader when it comes to funeral homes?  What can you do to brand your services?

Options might be to position your furneral home, or brand, as the most economical of the three in your community.  The opposite position would be to be the most expensive. How would your brand justify the cost and provide the value for the price if that’s the option you choose?

Is the brand the way you take care of customers?  The extra value you provide, such as providing white gloves to pall bearers?  Perhaps it’s the uniforms your employees wear?  Is it how you greet guests coming to view the deceased?  Or is it the follow-up you do after the services iwth the family?  Perhaps it’s the relationships you have with area churches.

This used funeral homes as an example.  Your business, wherever you’re located or whatever stage of business you’re in, can take advantage of the niche you possess.  Whether you believe it or not, you have a niche you can use to build your brand.  The possibilities are there, but there are also times when you need an independent, third party perspective to help you see the potential.